Our record for watching steam trains is not unblemished. Once last year we noted the expected time of arrival and timed our circular walk to arrive at the station in time to see the train. Well, that was the plan. In the event we met a lot of people walking away from the station; we were too late. The mystery is that we neither heard it nor saw the smoke.

Another time I saw a reminder on the internet and jumped to conclusions resulting in being two weeks early! We did not wait at the station, but farther along the track. Even so, I should have realised there was too little activity.

This week the time of the train had been announced and updated. I wanted to set off twenty minutes before the train was due. What happened isn’t important, but I went to the station on my own and heard the alarm for the level crossing barriers before I was within sight of the station. As I arrived I was told there were over one hundred people there. I wanted to cross the bridge for a better view, but the steps were crowded. The train was coming early so I stopped on the bridge, where I was barely tall enough to see what was going on.

Hubby, who followed me down, found a spot in the station car park and took some good photos. All that can be said about mine is that the angle of view is unusual! 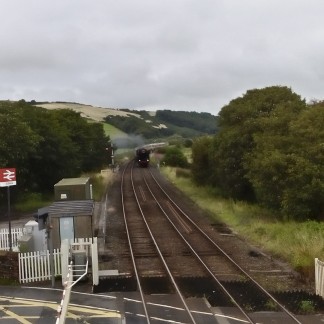 There was a lot of competition on the platform for a good place to take photos. The service train waiting to continue its journey along the single track blocked the view from the opposite platform.

The steam train only slowed down rather than stopping in the station reducing the photo opportunities even more. My Sony phone freezes action shots, but there is a ‘shadow’ on one of these photos. Hubby did much better this time, both with his position on the station and his camera. (I refused to upgrade to it, so have no real grounds for complaint!)

The advance information suggested that Leander would be pulling the excursion along the Cumbrian Coastal line “depending on availability”. In the event it was an unnamed locomotive 48151, which passed through on a very blustery afternoon. A number of people had ventured out to see it. The humid conditions gave atmosphere to the clouds of steam as the engine began to pull out of the station, with a long line of coaches behind it.

Changes to my blogging and social media habits