In a book review on Sue’s Trifles I wrote about my childhood memory of watching birds in the garden. Although I live hundreds of miles away from my childhood home, I still watch birds through the window. They are not usually easy to photograph using my phone. One exception was a very determined (or perhaps obsessed) blackbird last winter. I took some video footage of his behaviour. It might help viewers to know that the bird had been flying at a window, leaving a muddy mess on the glass and the windowsill. Hubby provided a mirror tile to distract him. I posted at least one video on Twitter earlier this year. I am posting stills from one of the videos here.

This year we discovered two birds’ nests in the garden. One unfortunately lost its habitat as hubby cut our clematis down after the supports (visible in the video of the blackbirds) were damaged in Storm Ali. I took a snap of it on the doormat, which featured in a PhotoChallenge post. The other nest is in the honeysuckle. It is rather difficult to spot.It is near the top in the centre of the photo. It may also be visible in the photo of the mouse. 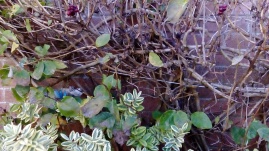 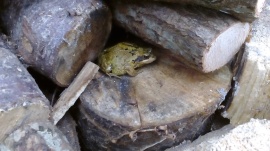 The plastic near the bottom on the left is one of several containing fat balls for the birds. Other visitors to the garden are interested in these. I was surprised how close I managed to get to a mouse, although the photo is cropped and thus enlarged. (Please click on the image to enlarge.)

Other vertebrates which we spot occasionally are amphibians.  We do not have a pond, but there are damp areas, where they can hide and find invertebrates to eat. We also have a birdbath. The largest cat in the neighbourhood has been spotted drinking from it!